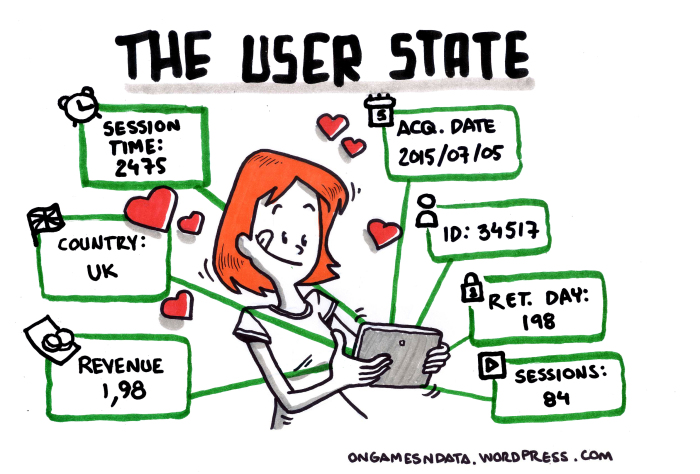 From game operator’s perspective, they want to know:

Predicting Unsubscription decision of players is important because it affects directly to revenue of game developers. Prediction of how long players will stay in the game can be interfered by external behavior, for example, how quickly/difficult their characters advance to new levels and how long they spend in the game each day.

The benefit of this model is to prevent players from quitting a game or at least minimize the number of quitting players, when players are dissatisfied with design, content, or other players’ cheating.

Predicting user behavior in an in-app purchase game by predicting purchase events. This model uses the variable “time of purchases” but not “product to be purchased”.

Many players invest in a game by purchasing the goods to improve their skills and level in the game.

A problem that many game developers often make is running too many advertisements in their game. Frequent advertisements do not lead to increase revenue because of advertisement fatigue and advertisements wear out. Ads fatigue makes customer no longer liking or buying goods from the game because it bothers them too much. Ads wear out means that customers will ignore the ads, so it makes no effect.

There is a solution for this problem: “Ads timing”. We allow advertisements appear only when the player is likely to make purchases.  Ad timing makes the likelihood of converting through the ad is increased, which leads to raising the revenue.

The predictive model is based on in-game signals: players success, curiosity, social interaction, playtime lengths and action frequencies. Predicting players’ readiness to buy is a cue after finishing a match. predicting the buy of a cue for gold coins for real currency.

There are two stages:

Goal: improve the monetization of online games, using microtransactions by reducing the amount of advertisement sent to the user. suggest user purchase in-app items only in the times he would really buy them

Data collection: D1: a data set of all users and all of their actions generated by clients and server in a period of time 1 month. They divide this set into subset: newly registered/non-registered, play 1 game/10 games. They find out a group of newly registered and bought some items.

D2: a set of all users that registered and bought some gold cue in the same period of time. the method used Random Forest, linear SVM, and decision tree

Information about features importance can be helpful to the game designers in order to improve the game and where to focus their design goals.

Conclusion: players can only be retained by remarkably changing their playing experience before the churn event. Cross-linking to other games in the company’s portfolio may be the more effective measure to deal with churning players.

Assess the business impact, the effect on communication with players, churn rate and revenues

Benefits of the prediction when a user will leave a game lead to the opportunity to adjust the game/playing experience to extend the lifetime of a user in a game, incentivized to stick with a game, bring potential monetization and possible to ignite a new lifetime in another game (cross-linking or cross-sold) or even lengthen game life-cycle.

They define high-value player segment. They formulate churn prediction as a binary classification (churn or no churn) problem. They use AUC, the area under the receiver operating characteristic (ROC) curve to compare performance because it allows them to compare models across all possible classification thresholds.

They also measure the business impact by applying the churn prediction model on a small scale by implemented A/B testing into 3 group of players.

The measurement is used by means of key performance indicators (KPIs): churn rate, revenue as well as email campaign click-through rate and facebook notification click-to-impression rate to measure the effectiveness of communication with players.

Definition 5. Daily Revenues (DR) DR = total revenues from players in a group during a day

Results show that sending substantial amounts of free in-game currency (monetary value approximately 10 USD) to churning and churned high-value players does not affect the churn rate remarkably. This indicates that highly engaged players cannot be retained at the end of their lifetime by simple incentives.

A possible extension of our research is an investigation of cross-linking to other (ideally similar) games in the company’s portfolio. This appears to be a more promising approach to deal with player churn than incentivization. Another option that we discussed and that would be valuable to explore is to touch the deeper gameplay mechanics and change players’ game experience in a way that keeps them interested in the game.